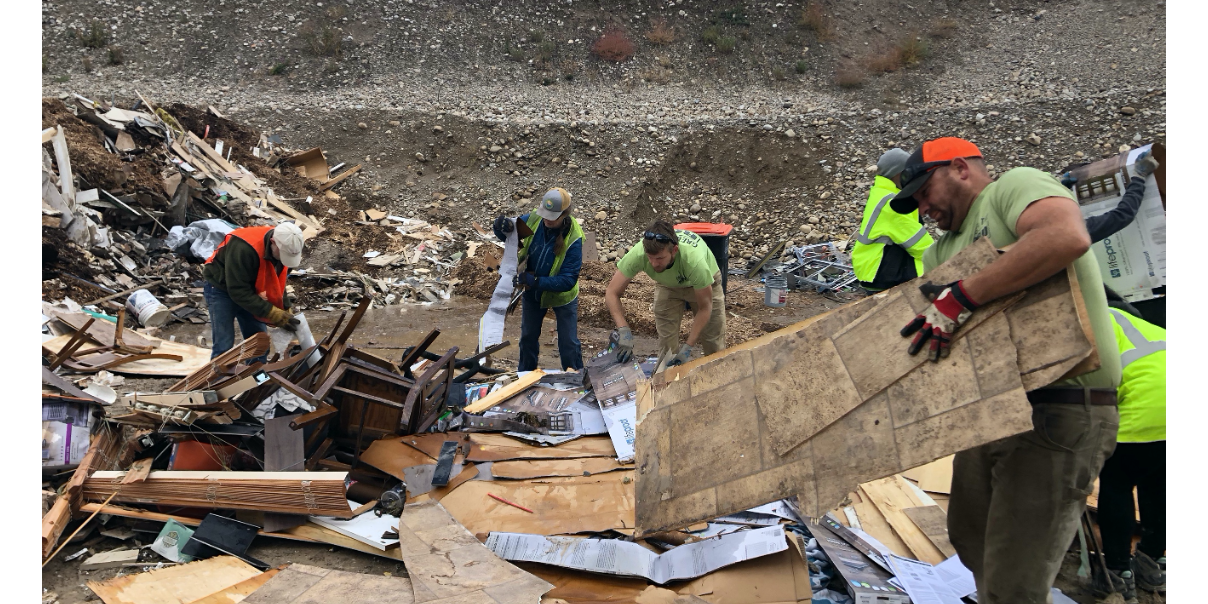 It’s no mystery that Teton Valley is growing and that construction & demolition (C&D) material is flowing to the Transfer Station at an unprecedented rate.  A recent Teton Valley News article reported on some of the problems created by the high volumes of unsorted C&D waste that is being brought to the Transfer Station during the current building boom. Contractors on a tight timeline toss everything into one dumpster rather than sorting into divertible piles such as dimensional lumber, metal, drywall, etc. and pass the added expense on to the buyer.  Sorting saves resources and saves money, but when time is at a premium, speed trumps responsible sorting on a job site.

TVCR’s solution to the C&D situation is to help the county build a facility which will allow Teton County to divert up to 70% of unsorted C&D waste for recycling, reuse, or composting. As such TVCR applied for an Idaho Department of Environmental Quality (DEQ) Source Material Management grant and was recently awarded $80,000 to pay for the majority of a Construction and Demolition Waste Sorting Facility.

The following is an excerpt from our DEQ grant application describing the need for the facility and the expected outcomes. Expect to see the new C&D Sorting Facility completed by the end of 2023.

The issue: Teton County Idaho is currently experiencing an unprecedented building boom resulting in most contractors dumping all construction and demolition materials into one unsorted dumpster regardless of recyclability or reusability of these materials. With time and space at a premium on job sites, the convenience of using unsorted dumpsters outweighs the penalty of paying the unsorted waste tipping fee ($210/ton vs. $15/ton for sorted). When unsorted loads arrive at the Transfer Station, the current layout and staffing at this county facility leaves no other option than to dump all of this unsorted construction and demolition material directly into the trash transfer building and transport it 90 miles to the Circular Butte landfill. Approximately 40-50% of this material is dimensional lumber which could be salvaged or chipped and composted on site. Another 2-6% consists of recyclable metal which could bring in additional revenue for the county.  An estimated 15-30% is inert construction material which can be stored in the C&D pit on site.

Unsorted C&D waste is typically bulky and doesn’t load well resulting in inefficient transport to the landfill. Some construction materials, like concrete and metal, can also damage the tipping floor and buildings as occurred in neighboring Teton County, WY. Much of the construction material currently in the trash transfer building is highly flammable wood which may have been a contributing factor in the Transfer Station fire of September 2021. Removing all of this divertible material from the trash transfer facility will allow Teton County staff to handle the increase in regular household trash due to the spike in local population.

Proposed solution:  The Teton County Transfer Station would like to establish a covered concrete sorting pad where unsorted loads would be delivered by the waste hauler and hand sorted by specially hired county staff. The sorting pad would be accessible year-round and have a catch-net fence to prevent litter or debris from flying away. All unsorted loads will be charged an additional “Sort Fee” which will allow the Transfer Station to employ two additional staff members who will hand sort and recover all divertible wood waste, scrap metal, and inert construction material. The remaining landfill bound waste will be swept into a front-end loader and dumped into the trash transfer building. This fee structure will not additionally penalize those waste producers bringing unsortable material like carpet and insulation, who will continue to be charged the “unsorted tipping fee” without the Sorting Surcharge.

Outcomes Analysis: A designated C&D sorting pad would result in 60-80% of all divertible material from construction sites being recovered from unsorted loads. In October 2021, we were able to conduct a detailed waste audit of 20 tons of unsorted C&D waste in 8 roll-offs resulting in the following findings:

From our audit we were able to recover ~10 tons of lumber, 1.3 tons of metal, and 4 tons of inert material leaving only 4.57 of 20 tons (23%) destined for the landfill (Figure 1). Staff have continued to do informal audits of unsorted C&D loads and have found this finding to be consistent over time.

Based on our annual unsorted C&D waste records, we calculate that a sorting pad could divert >1200 tons of waste per year on a consistent basis (70% of the 1669 tons of unsorted C&D in 2021). As population grows and construction continues to ramp up in Teton Valley, this project will continue to have bigger returns each year, helping us meet our diversion goals, helping us staff our facility, and relieving the hauling pressure at our Trash Transfer Station by diverting as much as possible.

There is currently a building boom in Teton County, Idaho, with many new single-family homes, apartments, affordable housing units, a large grocery store, and other expansion and renovation projects with the high potential for generating significant construction waste. Building permits increased from 48 in 2011 to 386 in 2021; permits for single family homes increased from 10 to 246 in the same ten-year period (see Figure 3.) Over the past five years, landfill-bound waste in Teton County increased by approximately 1000 tons per year (Figure 4), largely due to additional unsorted construction and demolition materials. Our county has set the goal of 35% waste diversion annually. We have been hovering at 32% for the past two years. The County and the waste hauler, RAD Curbside, both recognize that C&D waste is a significant contributor and our primary target for improving diversion percentages.

Over a 10-year period, projected population growth in Teton County is tracking at about 5% annually and close to 10% increased waste production. While not all of this is construction and demolition material, when we look at the biggest building years in Teton Valley, 2019 before the pandemic and 2021 during the pandemic influx of new residents, we saw a 54% and a 35% increase in unsorted C&D waste. (Fig 4)

This project has the potential to divert >13,000 tons of construction waste over a ten-year period, having the single greatest impact on managing our county’s waste stream. This type of program could easily be exported to other Transfer Stations in Idaho and the Northwest

We estimate the proposed Sorting Pad would have a 20-40 year lifespan with some expected repairs to the fencing and possibly the roof. The concrete pad would last much longer. The estimated waste diversion of a ten year period will be >13,000 tons of material – reused, recycled, composted, or diverted into the inert C&D pit.

In terms of Materials Management, unsorted loads (especially those that contain large percentages of lumber) take up a disproportionate amount of space in the trucks that haul material to Circular Butte.  It is estimated that a ton of unsorted C&D material takes up the space of two tons of regular material in a haul truck resulting in inefficient transport 90 miles one way. Unnecessary transport is not only a waste of fuel, but also strains our growing county’s ability to manage the overall increase in landfill-bound waste.

Sorted C&D waste in Teton County has an excellent chance of being reused locally based on current and proposed management systems at the County Transfer Station including:

Salvage: Sorted scrap metal and scrap lumber is separated into piles and every Friday the Transfer Station opens for salvaging of these materials. While this program is currently not marketed in the community and hours are limited to one day per week, in 2021, 23 tons of scrap metal was salvaged for reuse. Scrap lumber, pallets, cabinets, windows, etc. accounted for an estimated 120 tons of salvaged wood reused in the community. With increased staffing, the County would like to increase salvaging days and see even more of this material reused.

Metal Recycling: In 2021, the remaining ~500 tons of scrap metal was recycled. Each year, the scrap metal pile is sold to the highest bidder for recycling.

Composting: All remaining dimensional lumber is chipped on site and incorporated as a carbon source for the animal carcass composting operation.

Inert Material C&D Pit: Items not suitable for recycling, reuse, or composting are held in the County C&D Pit on site.

While this effort resulted in significant waste diversion that summer and we believe caused lasting behavioral change at some job sites, the COVID-fueled building boom in our rural community has led more and more contractors to operate on tight time schedules which make sorting loads on-site either logistically impossible or too burdensome given the pressure to finish the job.  We also know that because waste tipping fees are a pass-through expense that many contractors will not make the effort to sort and would rather pay the higher tipping fees or “sort fee”.

C&D waste sorting on job sites runs the risk of being improperly done due to lack of knowledge or motivation. Specially trained Transfer Station staff who specialize in sorting C&D waste will not only ensure that the job is done right, but also that it is done efficiently, with the offending contractor footing the bill through the “Sort Fee”.

Lacking a designated sorting space at the Teton County Transfer Station currently makes it impossible to recover any of the material delivered as unsorted. This project would eliminate that barrier entirely.

Once the Sorting Pad/Building is installed and the new “Sort Fee” is implemented, this waste diversion program will not only be self-sustaining, but will also allow the County to employ two to three additional employees whose primary responsibility would be waste diversion including sorting the unsorted loads, stacking and organizing salvageable materials for easier and safer public access, and supervising additional community salvage days. The new facility/program will more than pay for itself.

Additional staff would grow as diversion and sorting needs grow. This use of funds has been approved by the current Teton County Board of County Commissioners. After initial construction cost, this program would be self-sustaining including supporting additional staff, repairs/maintenance, and any monitoring.

Sort and Save: Construction Waste
February 22, 2019